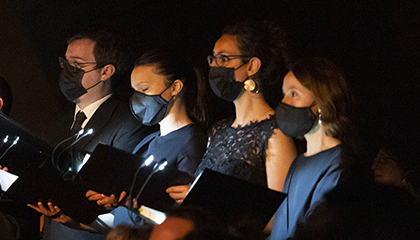 Awakening the senses in the night, the caress of the wind, the touch of water, the barely distinguishable rumour of the living: the Dijon Opera Choir offers us an unprecedented sensory experience, with a bouquet of rare scores.

Rooted in the aesthetic debates on imitative music, the relationship between music and nature finds its most delicate and sensitive field of expression in choral music. It is the great Anglo-Saxon choral tradition that the Choir's lyrical artists share with us here: both spiritual and eminently corporeal, the voice penetrates the mysteries of the world in Eric Whitacre's Water Night, inspired by a poem by Octavio Paz, or in John Rutter's The Sprig of Thyme, heir to the Anglican liturgical tradition. His 'cuckoo' is answered by the 'blue bird' of Charles Villiers Stanford's superb eight-part pieces, while the works of Bo Halten and Ola Gieilo offer the great flatness of the snow. Musical time, as Wagner predicted in Parsifal, is transformed into space under the empire of the voice, opening onto the pictorial marvels of Britten's Five Flower Songs (1950), rich in revisited folklore, and Gustav Holst's Two Eastern Pictures, the second of which, "Summer", is worthy of the cosmic imagination of the author of The Planets.