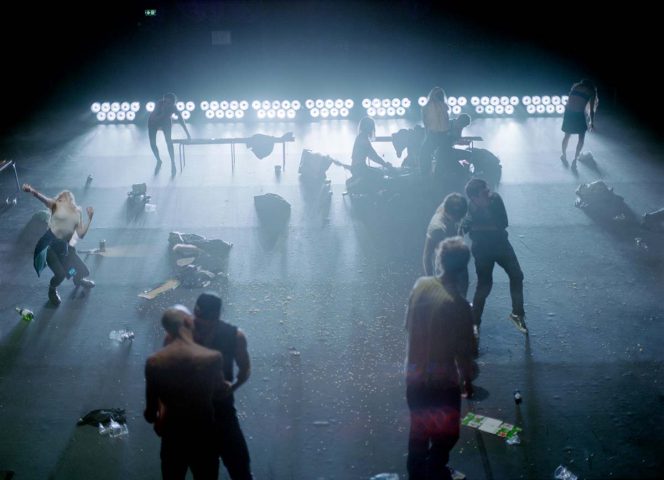 Since the beginning, Gisèle Vienne has been interested in the way our contemporary cultures deal with more or less archaic powers or impulses. All the more intense because they are socially "unseemly", they often arise at the border between the organic and the psychic, at those decisive points identified by Georges Bataille - death, eroticism, violence - where the living is confronted with its limits. Historically, they have been taken care of and channelled by religious rituals, such as sacrifice or shamanic trance. Today, they are also channelled through artistic languages reinvented by each generation (punk, rap, house...), which work to make possible what the psychologist Bernard Rimé - another important reference in the choreographer's thinking - calls "the social sharing of emotions". Crowd presents this sharing with unprecedented acuity, and confirms an important turning point in the work of Gisèle Vienne. For the second time after The Ventriloquists Convention (2013), she plunges intimacies into the space of a group. The interactions between the fifteen individuals embarked on this "emotional roller coaster" give rise to at least as many secret or exposed micro-histories, orchestrated in complicity with the writer Dennis Cooper. Traits that escape or deliberate signs, collective high points and bursts of singularity weave a fascinating infra-text that we must grasp on the fly, punctuated both by Peter Rehberg's soundtrack and by Gisèle Vienne's quasi-filmic montage of "retouched movements". Crowd is an incessant travelling shot that leads our gaze from the detail to the wide shot, from reality to fantasy, vertiginously altering the very course of time. Project shared with Le Dancing CDCN Dijon Bourgogne-Franche-Comté, as part of the Art Danse 2022 festival.