Making room for a young artist's new paintings.
To make herself at home. To give her the means to achieve this.
Painting is an occupation that allows itself, alas, all modes of consumption, as well as, fortunately, all the most thorough research of community imagery, and therefore universal.
When painting is taken by storm, with all the skills, with all the mixed techniques, it keeps its immeasurable power of attraction. Against all odds.
That it is the work of a young black-American woman who knows how to summon up styles, pictorial means and natural iconography, is no longer a novelty, nor a paradox, nor a legitimacy finally acquired, but the full awareness of an era that is finally re-establishing the order of good things.

To make room for a work, already abundant despite the artist's youth, summoning in sometimes domestic settings, the gesture of the black American people in their finery, situations and uncompromising figures.
Very quickly celebrated for her large vertical compositions with monochrome backgrounds on which characters display their bodies with ease, where men and women are cut out in assertive silhouettes and often split into shadows, Self was able to put on her side the art of assembly, of sewing, of a two-dimensional cubism fond of cut-out papers or machine-sewn fabrics.

Is there a constant abstract expressionist referent in recent great American painting? If so, is it still there, aligning surfaces in coloured, textured or simply uniform flat tints?
Perspectives are foreshortened, or even non-existent, when the subjects are shamelessly placed on top. The montage of checkerboards, tiles, bricks, floor tiles tracing a vague architectural space, domestic perhaps, allows the subjects to be inscribed in a voluntary manner.
And what would she make of Leon Golub, when everything seemed to revolve around politics in painting, especially when the monochrome backgrounds gave the characters in action the front stage and the brutal frontality of the narratives thus described?

Sill, 2020 welcomes the visitor with a horizontal statement, literal in that it fully justifies the title of the exhibition. On a parquet floor, a green floor lamp slightly protrudes from the frame, on the left hand side, while the top right edge opens a square window from which a red tulip (?) points. The heroine of the painting is seated in a circular yellow armchair with black highlights. She is going to light the street lamp. She is one, and her shadow, black for one arm and one leg and pinkish beige for the other pair of limbs. The patchwork of sewn fabric pieces builds up the figure in a sewn/drawn style that has become a style in the artist's work.

The collage and assembly of used fabric pieces from one's own wardrobe has a long and finally recognized and saved history in Black American culture/ Think of the Alabama Quilts, for example, the Gee's Bend, the Black American community that has become the quintessential folk art and quilt making community.
The recycling, the intuition of sophisticated compositions, the mastery of colours have made the reputation of artists such as Annie Mae Young or Lorraine Pettway to name but a few.

The stage is set, leaving room for the painting that unfolds in successive rooms, delivering, here, a black model, a naked couple with obvious and ostentatious sexual attributes.
Echoing Sill, 2020, the diptych Carpet, also 2020, resituates the same movable elements as the lamp post which has turned pink (the subject lends itself to this!), the circular armchair which accommodates the female figure with her legs wide open, and the pink carpet on the left panel and the black one on the right. The yellow/black inversion plays a dialectic of background/shape when the walls/backgrounds carry the colours of the mirrored carpets.
Making room for a love scene, the two-panel painting prepares the meeting of the two protagonists for a sexual collaboration that is replayed in other paintings that are even more explicit in terms of the action that is carried out. Here, the man on his knees, his sex still flaccid, his arm outstretched in invitation to his future partner beyond his painting, in the other side of the second panel, inflates his alpha male pectorals!
Black Macho, and the Myth of the Superwoman, by Michele Wallace, published in 1978, had put its foot down on the macho conventions inherited from Black Power and the marginalisation of the black woman in the ancestral clichés assigning her a framed, constrained and codified femininity. The fact that Michele Wallace is the daughter of the artist Faith Ringgold, celebrated today as a pioneer of Afro-American painting, is not the least of the paradoxes, given that her mother had to fight all her life against the double relegation of gender and skin.
Ringgold's art also borrows from the Quilts with its share of decorative, ornamental and popular traditions mixed with political and social subjects. Tschabalala Self is a great admirer of Faith Ringgold and shares her interest in the folk art of her community.

Self's exhibition in the Consortium Museum is based on a domestic staging of the painting and its occupants in their hieraticism, which is all the more assertive because it is expressed in force in the foreground of the purely two-dimensional painted surface.

These poses, Father, 2019, Blonde, 2019, Snake, 2020, Dreamers, 2021 (for the male character) have this of the Antique in that they use the naked (or partially clothed) male or female model as an affirmation of the specific characters of black bodies.
The works on paper, which are new, feature figures seated (melted) on chairs with contours highlighted in the manner of wrought-iron garden furniture, which are featured in at least two rooms in the exhibition.
This furniture - tables and chairs, benches - was discovered last year (October 2021) at the Performa festival in New York, for which the artist conceived, wrote, designed and staged a performance - Sounding Board - at the Jackie Robinson Park Bandshell in Harlem. A film documenting the performance is shown in the mezzanine room.

Make Room, the artist's first solo institutional exhibition, deflects, if need be, the pressure she has been under for several years - a success that has come to pass - towards mature works in which male/female relationships are expressed in domestic figures and poses in light and shadow, in full view of everyone, regardless of the intimacy and assumed shamelessness of the characters painted. 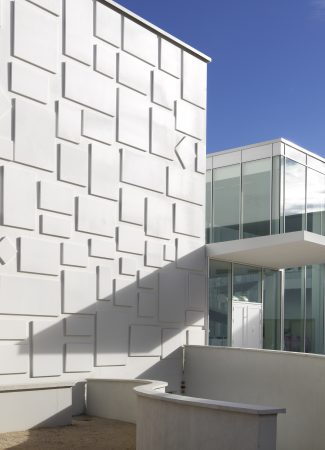