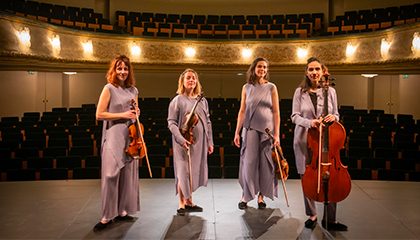 Known for their vivacity, the musicians of the Zaïde Quartet bring together four emblematic personalities of German Romanticism, linked by love, friendship and filiation: Fanny and Felix Mendelssohn, Clara and Robert Schumann.

Felix was one of the most ardent defenders of Robert's scores, who himself participated in the adventures of his contemporary. Their musical kinship shines through in this recital, which combines a short piece by the former, Capriccio, with the magnificent Second Quartet by the latter. But the musicians also endeavour to give their rightful place to the female composers with whom the two men lived, who are too often considered as 'companions': Fanny proves to be as inventive and daring as her brother in his Quartet in E flat major. And if Clara is known as the virtuoso interpreter of her husband's works, the transcription for string quartet of his Variations op. 20 testifies to a dazzling and underestimated gift.