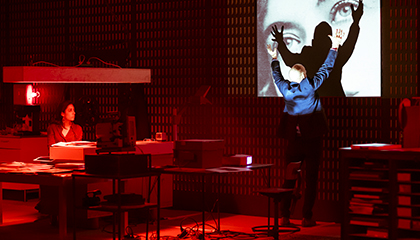 A young man dreams of a forbidden love. An old man dreams of the young man he once was. Between them, the forest of legends and memories... From Janácek's cycle of lieder, Ivo van Hove has drawn a whole inner drama, reflecting the passion of the old Czech composer for his ultimate muse.

In 1917, a 63-year-old married composer on the verge of stardom meets a young mother, his 37-year-old youngest daughter. "Without you," he confided to her, "none of my compositions could be born out of this desert in which I live. As soon as he returned home, he set about composing the Diary of a Missing Person, about the love of a teenager, Janícek, for a Gypsy woman named Zefka, and the torments of his torn conscience. The personal inspiration behind Janácek is obvious; Ivo van Hove wanted to highlight it by doubling Janícek's role, so that the composer in the evening of his life and the young man in his dream can converse together. The director of Toneelgroep Amsterdam also asked the Flemish composer Annelies Van Parys to complete the cycle, so as to bend the rhythmic curve while developing the role and point of view of Zefka: the gypsy woman in turn questions the identity of her gadjo lover, who is as mysteriously foreign to her as she is to him.