If you think a guided tour of the city is serious stuff that’s reserved for French history buffs, then try this rather off-the-wall version!

The tourist office has entrusted a theatre troupe with organising a humorous tour of Dijon’s protected sector. This madcap encounter takes place every Sunday of the summer season, either before or after the brunch in the Dijon market halls.

A guide with a difference

In her pink blouse, school-mistress glasses and knee-length skirt, our guide met us at 11 am in the Cour de Flore not far from the tourist office.

With bell in hand, frequently ringing it to hurry us along, the actress set the mood for this guided tour parody with a totally quirky touch. Evidently, she had a few accomplices cueing her from among the public!

In an amusing way, we learned quite a few anecdotes about the great men behind the culinary specialities of Dijon: the canon named Kir who gave his name to the white wine and crème-de-cassis aperitif, Gaston Gérard and the famous chicken dish, and Philip the Hardy who invented the word “moutarde” (mustard).

With immense creativity, the Saint-Apollinaire improvisation troupe led our group through the pedestrian streets of Old Dijon. From the courtyard of the Vogüé private mansion to the owl of Notre-Dame, a variety of colourful characters joined our procession along the way. We even met the cook of Philip the Good, who painted us an amusing picture of the Burgundy duke!

I was amused to learn the story behind the figurines around Jacquemart, the character who proudly rings the bells of Notre-Dame church. The names given to his wife and two children, Jacqueline, Jacquelinet and Jacquelinette, are not a joke at all!

A little further on, we had to wait patiently for our turn to stroke the owl of Dijon. But that’s it, I won’t tell you any more! Except that this fun tour really was unusual and gave us an appetite! It was nearly 1 pm so we went for brunch in the market halls, to stay on the same central theme as this off-the-wall tour: wine and gastronomy! 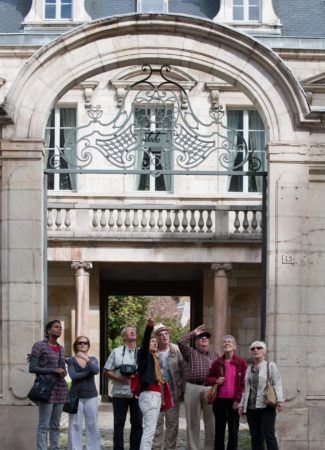