Via Injabulo | Via Katlehong Dance 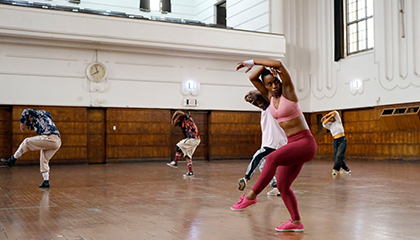 Via Injabulo, joy in Zulu!
The Via Katlehong company collaborates with Marco da Silva Ferreira and Amala Dianor for two pieces that plunge into the heart of Pantsula culture: an encounter under the sign of the liberation of memories and the reappropriation of bodies.

Born in the townships of South Africa, Pantsula is a counter-culture and a street dance that has gradually been sublimated into a total artistic expression. A desire for freedom that involves the affirmation of identities inscribed against the history of segregation and assignment, but above all an explosive desire for rhythms and dances, sometimes in rubber boots, the symbol of South African miners. The Via Katlehong company, from the East Rand, has created two choreographic pieces, entrusted to Amala Dianor and Marco da Silva Ferreira: Emaphakathini explores these spaces of the "in-between" of bodies and identities. førm Inførms transposes onto the stage what the disarticulated bodies carry of memories and sufferings of the past.

+ after party Via Kuze Kuse Party* in the foyer bar after the performance
* Kuze Kuse means 'to the end of the night' in Zulu.

Via Injabulo | Via Katlehong Dance