The Musée des Beaux-Arts in Dijon and the Musée Cantini, Musée d'Art Moderne de la Ville de Marseille, in partnership with the Galerie Jeanne Bucher in Paris, are organising a retrospective of the work of the internationally renowned artist of Portuguese origin Maria Helena Vieira da Silva (1908-1992).

On the occasion of the thirtieth anniversary of her death, this retrospective brings together nearly eighty works by the artist and retraces the key stages of her career marked by a relentless questioning of perspective, urban transformations, architectural dynamics and the musicality of the pictorial touch.

In Dijon, the exhibition is divided into two parts. One part is devoted to a retrospective and chronological overview of Vieira de Silva's rich and varied oeuvre, while the other focuses on the special relationship between the artist and his patrons and friends, the couple Kathleen and Pierre Granville. The museum's entire Vieira da Silva collection will be exhibited on this occasion. It reveals, through the prism of the Granvilles, constant in their choice, the recurring motifs and themes in the artist's work. Thanks to this couple, the Musée des Beaux-Arts de Dijon now holds nearly forty works, making this collection one of the most complete devoted to the artist after the Musée National d'Art Moderne in France. Of particular note is the largest format ever painted by Vieira da Silva (300 x 401 cm), given by the artist to the Musée de Dijon in 1972 to complete the Granville donation. This painting, one of the emblems of the museum's modern collection, received its title from Pierre Granville himself: Urbi et Orbi.

These two independent readings of Vieira da Silva's work allow us to trace the artist's career, from his figurative beginnings in Lisbon in the 1920s to the evanescent paintings of the 1980s. The loans and the rich collection of the museum thus show his repetitions around cities, tiles, checkerboards and the path towards non-figuration, but also his plastic research in the more malleable field of graphic arts. 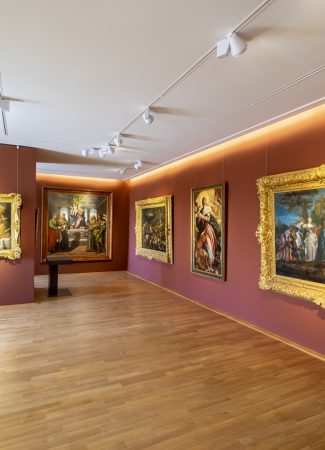