Free with the Dijon City Pass

If you’re staying in Dijon you might like to know more about the troubled history of the Burgundian capital. The tourist office proposes a guided tour, “Discovering Dijon”, which you must not miss if you want to understand the history of the city of dukes and see all the best sights of the protected sector.

From the Dukes of Burgundy to the present day

This city is considered to be one of the most beautiful historical towns in France, with its remarkable architectural heritage shaped by history and close links with the Dukes of Burgundy and the Parliament of Dijon.

Discover the epic of the Great Dukes of the West who, between 1363 and 1477, made Dijon a European capital ahead of its time! During the three centuries that followed, the parliamentarians had majestic facades erected in the heart of the city where you can still admire around a hundred private mansions.

At the end of the 19th century, industrial growth and urban development led to the demolishing of the old rampart walls. Their place was taken by today’s boulevards which encircle the protected district.

Dijon’s medieval architecture comes in the form of enormous religious buildings to be found in many places across the “city of a hundred steeples”. The Romanesque church of Saint-Philibert and the two icons of Gothic architecture, Notre-Dame and Sainte-Bénigne cathedral are among the most beautiful places of worship in the Burgundian city.

But Dijon’s most iconic monument, beyond a shadow of a doubt, is the majestic Palace of the Dukes and Estates of Burgundy. The first of the Valois dukes, Philip the Hardy, rebuilt the structure from 1365 onwards, transforming the Estates hall into a real palace. This evolved over the centuries to include the classical architecture of the facades designed by Jules-Ardouin Mansart, architect to Louis XIV. The building now houses the city hall, as well as the prestigious Fine Arts Museum and the tombs of the dukes.

Old Dijon offers visitors a 97-hectare protected area in which three thousand houses and nearly two hundred historical monuments rub shoulders with natural spaces in the form of squares and parks designed in neoclassical style. At a height of 46 metres, the ducal terrace at the top of the Tower of Philip the Good provides a panoramic overview of this unique heritage of monuments.

The Dijon art of living

The art of living in the Burgundy capital has been enhanced by the creation of pedestrian areas around Place de la Libération, as well as the installation of a self-service bicycle system and the building of two tramway lines.

Dijon has seen an increase in traditional factories proposing tours that combine history and tastings of the flagship items of Dijon’s gastronomy, such as mustard, gingerbread and blackcurrants.

Brunch at the Dijon market halls, unusual tasting venues with the “Wine Thursdays” or the “tower aperitifs” all contribute to Dijon’s reputation in terms of culinary art. In 2021, the International Gastronomy and Wine Centre will open its doors to reveal an authentic new district in the centre of Dijon. Joining ranks with Tours, Lyon and Paris-Rungis, the city of Dijon will promote “Le repas gastronomique des Français®” (the French gourmet meal) and, more importantly, the Climates of the Burgundy vineyard. 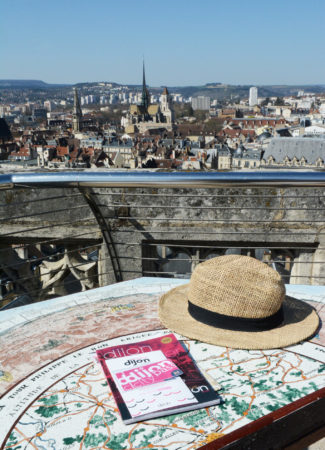