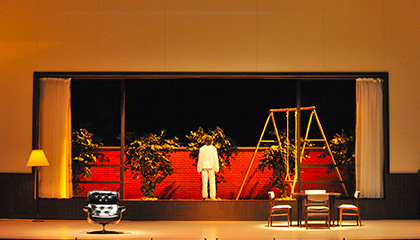 Between ghosts and fantasies, a hallucinatory camera obscurity, with oppressive atmospheres, where the unspoken weighs ever more heavily: the fourth of Britten's seven operas is without doubt one of the most fascinating.

Inspired by a famous short story by Henry James published in 1898, The Turn of the Screw features the recollections of an unnamed governess, hired by an unseen guardian to take over the care of two young children, Miles and Flora, from a Miss Jessel who recently died in unexplained circumstances. Gradually, it becomes apparent that the house, isolated in the English countryside, is haunted by Miss Jessel as well as by a second, no less disturbing figure: that of the late Peter Quint, who was her lover. What are they doing with the children? Why do they try to lure them away? Do ghosts exist? Between the strange and the marvellous there is an undecidable gap, as narrow as it is artistically fertile - the fissure of the fantastic, which is, according to Tsvetan Todorov's definition, "the hesitation experienced by a being who knows only natural laws, when faced with an apparently supernatural event". Britten, with an astonishing economy of means, brings James's "disquieting strangeness" to a climax.