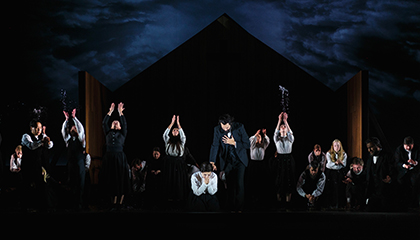 A spiritual guide confronted with his wife's adultery: souls and bodies in struggle meet in this little-known masterpiece by Verdi that Debora Waldman's complicity with the Dijon Bourgogne Orchestra will bring back to life.

Towards the end of the 1840s, Verdi had just passed his thirties when he signed two masterpieces in quick succession, Macbeth (1847) and Luisa Miller (1849). Their success gave him a certain creative freedom. What new subject would he concentrate on? Few opera lovers know the answer, and for good reason: Stiffelio was eventually withdrawn by the composer himself, despite the beauty of a score to which he was very attached. The plot, which Piave based on a contemporary play, is reminiscent of a drama of the Scandinavian school. The pastor Stiffelio joins his flock with his wife Lina and discovers that she has cheated on him. The struggle between the thirst for revenge and the desire to forgive in his soul inspired some of Verdi's most beautiful pages. But the scandal of such an adultery, and the evocation on stage of a divorce, provoked the wrath of the censors. It was not until 1992 that the discovery of autograph fragments in the Verdi archives finally allowed the original score to be reconstructed.